Uechi-Ryu Karate-Do was originally a form of Chinese Boxing – one of the many pangainoon (“half-hard-soft”) systems. According to one researcher, its formal name may have been “Nan-Pa Toro Ken” – South Group Mantis Fist.  However, the founder never told the true name of the system he studied in China. This system combined the movements of the tiger, dragon, crane, leopard, snake, mantis, and cobra. Today, Uechi-Ryu Karate-Do is mainly known as a “Tiger, Dragon, Crane” system, named so for the three major ready-positions of those animals and their predominance in the system.

Grandmaster Uechi Kanbun Sensei was responsible for bringing this art out of China. Kanbun Sensei’s decision to teach allowed the system to spread worldwide, thus preserving the original style and many variations for all to study.  According to Toyama Seiko Sensei (a direct student of Kanbun Sensei), Uechi Kanbun Sensei never told the true old name of the system, but simply named it “Pangainoon-Ryu Karate-Jutsu”. 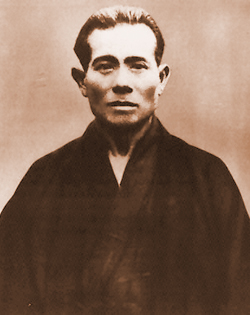 Uechi Kanbun Sensei was an Okinawan Bushi descendent, born on 5 May 1877 in Izumi, a small village on the Motobu peninsula of northern Okinawa.  As a young man, Kanbun Sensei left Okinawa for China to avoid conscription in the Japanese Army, to study Chinese Kung Fu, and to further business prospects for his family’s herbal medicine trade.  His resolve to study fighting arts in China was inspired by incredible tales of the fighting skills and feats of the Chinese masters as told to him by an old karate master named Toyama, who had traveled frequently to China to study such arts.  Kanbun Sensei was already proficient with the Bo (staff) and had excelled in the karate training of his village, but these stories fired his imagination and made him thirsty for new and deeper training.  And so, in March 1897, nineteen year old Uechi Kanbun Sensei left Okinawa for China to seek fulfillment of his dream of becoming a true warrior. 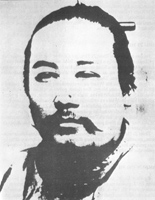 In Foochow, a major city of the Fukien Province of China, just west of the northern tip of Taiwan, Kanbun Sensei met a young Taoist priest named Shuu Shiwa Sensei, a master of Chinese Boxing.  Among other styles, Shuu Sensei taught his family system of Kung Fu which, according to research, may have been created by an ancestor approximately 200 years prior, the monk Shuu Anan. Kanbun Sensei studied every day for ten years, and became a master of the Shuu Family Style.  His training with Shuu Sensei extended beyond fighting skills — Kanbun Sensei also deepened his already-considerable knowledge of the healing arts, and made medicines which he sold to help pay his tuition. Eventually he was permitted to teach, and opened his first school in Nansoue, about 250 miles west-northwest of Foochow.  He taught there for nearly three years.  Near the end of that time, an unfortunate incident occurred in which a technique from the Shuu Family Style was accidentally misapplied and a man was killed.  Kanbun Sensei felt completely responsible for the death, and so closed his school and left China, vowing to never teach Kung Fu again.  The year was 1910. It is probable that Uechi Kanbun Sensei was the only Okinawan who ever taught Shuu Family Style Kung Fu in China.

After his return to Okinawa, Kanbun Sensei married and settled down to a life of farming.  His son Kanei was born on 26 June 1911. Other children followed, and the Uechi family grew.  Kanbun Sensei still refused to discuss his skills in Kung Fu or his life in China.  After seventeen years of silence, Uechi Kanbun Sensei was finally convinced to share his art once again.  He had left Okinawa in 1924 for employment in Mainland Japan, in the Wakayama Prefecture near Osaka.  His first non-family student was an Okinawan named Tomoyose Ryuyu, who lived in the Okinawan compound in Wakayama close to where Kanbun Sensei lived.  The year was 1927 — within a few years, Kanbun Sensei and his senior students established a highly reputable dojo. Kanbun Sensei taught full time, and also made and sold the medicinal compounds he had learned from his father using herbs he brought from China.  By that time, the art of fighting without weapons was becoming known as karate — “Void Hand” — which had previously been known as “Chinese Hand” (one Japanese Kanji KARA means “Chinese”, the other KARA means “Empty”).  When Kanei Sensei was sixteen years old and in ill health (1927), he joined his father in Wakayama and began to learn the art of “Pangainoon-Ryu Karate-Jutsu” — Half-Hard-Soft Style Empty Hand Technique.  He regained his health and became proficient enough to establish his own Osaka dojo in April 1937. 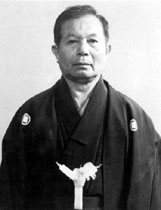